In telling the history of Magnolia Brazilian Jiu-Jitsu, the obvious place to start would be with the history of Jiu-Jitsu and how it found its way from Japan to Brazil to Magnolia. However, I would like to start at a less obvious place. Much has been written about the philosophy of Jiu-Jitsu, a philosophy that can be traced to the ancient honor code of the Samurai that stresses virtues like courage, integrity and loyalty. This has led to a belief that training in Jiu-Jitsu has many benefits well beyond learning how to defend oneself. I believe this to be true.

However, before I  knew what Jiu-Jitsu was, I learned about these virtues from another source, my grandfather. He, like many men of his generation, the "Greatest Generation", rebuilt this country after the great depression with hard work, sacrifice and a sense of community. They volunteered, in fact, insisted on enlisting in the military when they knew they would be sent to fight. These are my heroes and my gold standard of courage and integrity. Their example is the foundation of the principles we try to live up to and pass on to our kid's at Magnolia Brazilian Jiu-Jitsu.

And now a brief history of Jiu-Jitsu from Japan to Brazil to Magnolia.
The system of unarmed combat used by the legendary Samurai warriors of Japan was called Jiu-Jitsu. Jiu-Jistu was more than a collection of techniques. It also included the philosophy and code of the Samurai, known as Bushido, which emphasized character traits such as courage and integrity. As the political scene in Japan changed and the Samurai vanished, Jiu-Jitsu survived, and the emphasis changed from warfare to personal protection. Many different Jiu-Jitsu schools, each emphasizing different techniques, emerged.

In the late 1800s a Japanese Jiu-Jitsu master named Jigoro Kano introduced many innovations to Jiu-Jitsu. Kano was a professional educator who changed the way Jiu-Jitsu was taught, believing Jiu-Jitsu was something that could be practiced by everyone. Kano embraced the idea that Jiu-Jitsu was more than a fighting system; it was a way of life. He stressed principles like “Maximum Efficiency Through Minimum Effort” and “Mutual Benefit and Welfare”, meaning we are responsible for the safety and improvement of our training partners.

In addition Kano selected techniques from various schools and discarded many of the most dangerous techniques. In doing so he fundamentally changed the way that martial arts was practiced. Since the most dangerous techniques had been removed, the remaining techniques could be practiced at full intensity, and therefore, could be trained in a more realistic environment.  His new style was initially just called Jiu-Jitsu, later Kano’s Jiu-Jitsu, and today Judo.

One of Kano’s students, Mitsuyo Maeda, traveled the world as an ambassador of this “new” style of Jiu-Jitsu. On his world tour, Maeda participated in hundreds of challenge matches against practitioners from many different fighting styles in what was a precursor to modern mixed martial arts competitions. After refining his fighting style, often incorporating techniques from other styles, he settled in Brazil and began teaching Kano’s Jiu-Jitsu or Judo to the Gracie family. The Gracie family, in particular Helio Gracie, continued the practice of testing Jiu-Jitsu against practitioners from every style of fighting and contributed to Jiu-Jitsu in many ways including the development of a defensive oriented system of fighting from the back, known as the guard, that suited his small stature. Helio preserved Jiu-Jitsu’s legacy of self defense for everyone and resisted the trend toward sport reserved for the most athletic.  The Gracie's style of Jiu-Jitsu is referred to as Gracie Jiu-Jitsu or Brazilian Jiu-Jitsu. Gracie Jiu-Jitsu has proven to be an effective method of self defense and has become essential for those participating in mixed martial art contests.

Brazilian Jiu-Jitsu gained popularity in the United States when the Gracie family hosted the first Ultimate Fighting Championship (UFC) competition in the U.S. This competition pitted fighters from several different styles of fighting against each other in a "no rules" format. I became interested in Jiu-Jitsu when I watched Royce Gracie, Helio Gracie’s son, defeat much larger opponents in the first UFC tournaments. My search for a place to learn Jiu-Jitsu led me first to judo and Chris Dewey at the Starkville Martial Arts Academy and later to Brazilian Jiu-Jitsu and Tony Torres-Aponte at Urban Jungle Self Defense.

While I learned great techniques from these world class instructors, there was something else that made a bigger impression and had a greater influence on me. I found these instructors both had created a very special training environment. It was an environment that I wanted to recreate for myself and my family. A place where high character people came together to work extremely hard to improve themselves. A place where they trained hard and pushed each other but always took care of each other. A place where they respected each other and embraced character traits like courage and integrity. A place where everyone "left their ego at the door" and was open to learning what others had to offer. In short, a place that reflected the legacy of Jiu-Jitsu and the example of my grandfather and a place where I would take my own kids and know that they would be surrounded by great role models. This was the inspiration for and is the aspiration of Magnolia Brazilian Jiu-Jitsu.
Scott Caldwell
Owner/Lead Instructor
Magnolia Brazilian Jiu-Jitsu 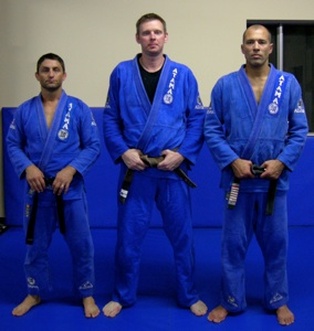